“Something isn’t quite right here…”

Posted on December 6, 2014 by flyingpointroad

It’s been an interesting couple of weeks.

Maine had a snowstorm just before Thanksgiving.  A large part of the state lost power, including our house here in Dash Landing.  Not a big deal — the generator kicked on (with a little help) and we were in great shape.

A few days later, we started noticing that the house felt strangely “drafty.”  And the temperature would drop way below the thermostat setting before the heat came on :

Our geothermal guy (Dave) came over to take a look and we discovered that the compressor circuit had popped on the generator panel.  The delay in the heat was cause by the system expecting the compressor, but having to rely on the auxiliary heat once the house got too cold.

This was a big topic when we were building the house.  Getting the right size generator and deciding whether we’d need a “phased switch” that would allow everything to start-up in an orderly fashion was weeks of discussion and debate.  Geothermal systems require a lot of power to start-up — particularly if the auxiliary electric heat is on — and we ended up going with an oversized generator just to be sure.

But despite all that work,  it looked like the circuit tripped when the generator came on during the storm.  Not good, more than a little disappointing, but not a disaster.  So we called the generator guy (yes – all guys…) and primed our wallets for a phased switch.

But then things got really weird.  When we went down to check the panel that night, the circuit tripped again.  No generator.

An hour later, it tripped again. 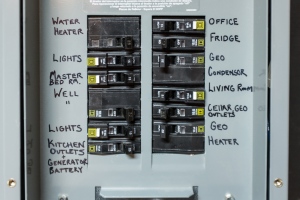 Dave came back the next day.  After a lot of poking around, we discovered that the wires to the circuit breaker had come loose.  How this happened after a year of flawless operation remains a mystery, but it’s a lot better than replacing a compressor.  A few turns of a screw driver and it’s been fine ever since.

You learn something new every day.