Posted on October 30, 2013 by flyingpointroad

“He reached for the brass doorknob but suddenly withdrew his hand as though he’d been burned. ‘What’s the matter?’ said Harry. ‘Can’t go in there,’ said Ron gruffly. ‘That’s a girl’s toilet.’ ‘Oh, Ron, there won’t be anyone in there,’ said Hermione. ‘That’s Moaning Myrtle’s place. Come on, let’s have a look.’“—Harry, Hermione & Ron entering Moaning Myrtle’s Bathroom for the first time.  Harry Potter & The Chamber of Secrets

While the finishing phase of Dash Landing is rocketing along, no one should be surprised if they show up to the house to see the master bathroom boarded off like it never existed.

Consider the past few days :

* We started the week with Pottery Barn deciding that we didn’t really need our bathroom lights, but not bothering to let us know.

* Rob the Tiler got the back splashes all but done, only to notice that one of the tiles was missing a stripe and needed to be replaced.  That meant prying off the faulty tile and waiting a week for the new one to arrive.

* Our plumbers, Jon and Levi, installed the toilet.  A few minutes later, they noticed a puddle on the floor — the toilet was leaking.  This was one of  THREE of the exact same model Kohler toilets they’ve installed in Dash Landing.  Only one had an issue — the master bathroom.

Just a tiny portion of the shattered glass door remains.

* Yesterday, our shower was scheduled to be installed by Tom Olds.  About an hour into the process, we hear a giant crash — a 30″ x 84″ x 3/8 thick glass door fractured into no less than a billion pieces.  Tom has been installing showers for 20 years and it’s the first one that has ever broken.

* Jon and Levi were installing the bathtub today.  A process that should have taken a few minutes ended up taking them the better part of a day and involved a sawzall.  Nothing good ever came out of plumbers using sawzalls in a new house.

We’re not exactly sure what’s happening, but there’s a perfectly nice half-bath down the hall and a shower on the second floor.  And if there’s a Chamber of Secrets hidden underneath the master bath — it can stay there. 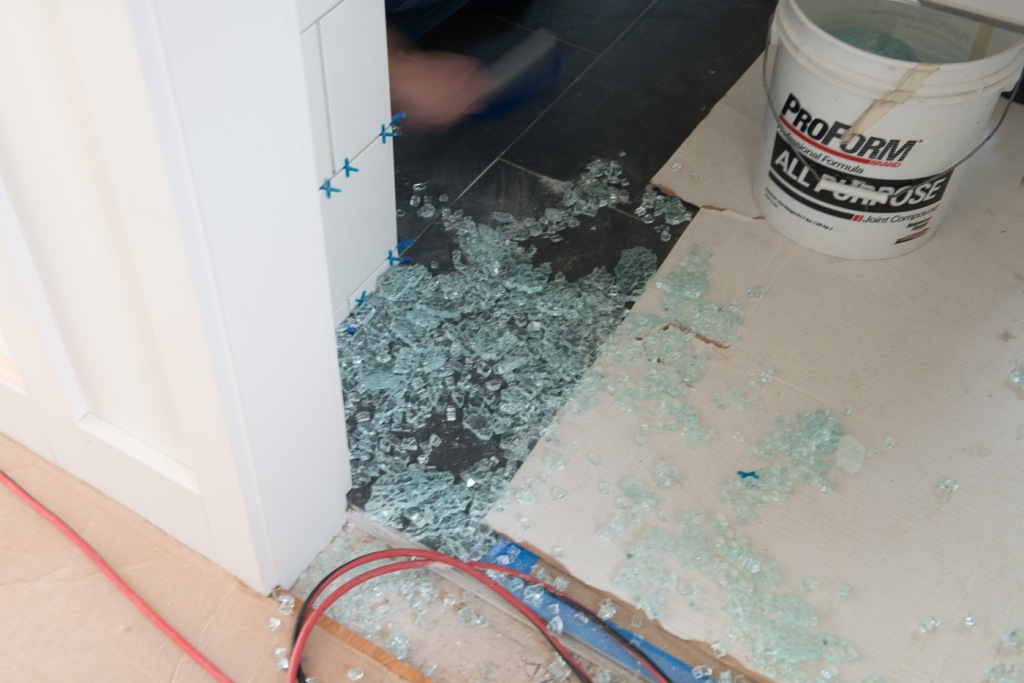