“It appears that rural electrification is going on, steadily and as rapidly as the market can take it.” Lewiston Evening Journal, December 9, 1935 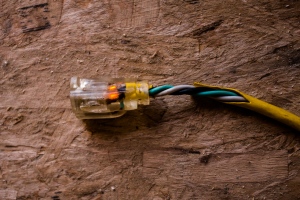 On August 19th of last year — while we were still trying to decide if we were going to buy the property — a contractor stood on the site and casually mentioned “Have you thought about electricity?”

Which we hadn’t.  Frankly, the notion that we’d have to figure out how to get electricity to a building site located less than a mile from one of the busiest shopping areas in Maine never even remotely occurred to us.

We promptly called Central Maine Power the next day and started on a great adventure.

Just to put this feat into perspective :

* In January, a construction firm in China’s Hunan province built this skyscraper in 15 days.

* NASA estimates — depending on planetary positions — that a trip to Mars will take 230 days.

* From conception to delivery, the average human gestation period is 275 days.  (Kanye and Kim Kardashian apparently took a little less because their baby is magical.)

* In 1920-1921, a Commission was established in the former Soviet Union to create a plan to electrify the country.  Ten months — just over 300 days — later, a five hundred page plan was presented to the 8th Congress of the Soviets in Moscow.*

Nonetheless, it’s a big day on Dash Landing.  The house frame is pretty much done, but we’re imagining that electricity will come in handy as they start to build the garage.

And besides, we were running out of Soviet era clip art.

“We must snatch away God’s thunderbolts. We can use all those volts for electrification.” – Vladimir Maiakovskii

* This can’t be a coincidence

← Fireplace.
Laurie goes over the fireplace. →

One Comment on ““It appears that rural electrification is going on, steadily and as rapidly as the market can take it.” Lewiston Evening Journal, December 9, 1935”